As some of you may remember, I offered to edit/critique/review written works that people sent to me. One fellow took advantage of this and asked me to review his book, so I did and I put my review on Amazon. But I got the idea to start advertising the books I review, putting them on my blog.

So, here is the first installment of my book reviews. I hope to see/read more in the future from friends and fellow authors. 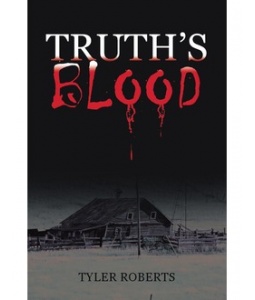 SUMMARY: The US economy has come to ruin. Inflation is outrageous, debt is climbing higher by the minute, and government handouts have bled the country dry. Yet self-entitlement abounds as the spoiled masses ignore the warning signs and snuggle into their cozy little bubble.

But disaster strikes when an angry China invades the US and takes the crippled country easily. Suddenly, the government programs are gone and a foreign power bares down hard on its subjects. Paper money is worthless. Food is disappearing. Crime is rampant. Cities are in flames. America is broken and desperate.

Truth’s Blood is the story of Clifton Lang, who saw it all coming and prepared. He, his family, and his little band of friends huddle together as the world falls apart around them. This is their story of survival against a harsh new government, the desperation of a fallen economy, and the increasingly-desperate masses.

Since the novel follows a small group of people, it’s important that you like those people. The three main men, Clifton, Monk, and Thomas are all standouts in their own right. Clifton is a world-weary man in his sixties, who is at once the wise old sage and the cantankerous old git. It makes for a very realistic combination and he’s a great guy to follow around, made more admirable by the minutes as he survives increasingly harsh circumstances.

Thomas is on the other end, a rich, entitled professor who buys into every lie the government throws until he is forced to see the truth of his privileged lifestyle. It’s fun to watch him learn and adapt as the story progresses. Monk is my absolute favorite character, humorous, wise, and strong all at once, you’ll fall in love with him fast.

The story itself is quite engaging, too. It’s a long book, but not a dry one. The plot is always pushing forward and it’s fun to see the old order, the apocalypse, and the new world all in one reading. While there are a few odd coincidences and convenient moments, the story feels very real for the most part, which actually makes it quite chilling.

It’s a surprisingly good thriller, too. While the world falls apart, you don’t see much of the chaos and destruction. The story takes place in a small town and all outside info is filtered through the television and survivors. This adds a strong element of the unknown, which adds a new level of fear to the story.

Some of the minor characters weren’t developed as they should be, but they’re not the crux of the story. The only characters I had problems with were the Chinese soldiers. They’re very two-dimensional villians, which is okay because they play a small part, but every soldier sounded like the last one. It’s a shame, too, because in the very beginning, we’re introduced to Chen, who is a delightfully wicked dude, or at least promises to be, but we don’t hear from him again. It’s a good problem to have, though when you want more of what you’ve seen.

There is also a struggle with the show/tell ratio. The showing is great, but there’s a lot of telling that skims over important scenes.

My biggest problem, however, was that the book was preachy. Obviously, it’s trying to teach a lesson here. This would be good if it wasn’t so repetitive, but sadly, it is. There are times when the morals work seamlessly in the book, like when Thomas, an economics professor, has a debate with a student. Other times, the story just stops as the morals are told, often the same ones again and again.

Despite the aforementioned weaknesses, Truth’s Blood is a page-turner. The fear is real and you’re always wanting to know what happened to somebody, or what’s next. Things are always, always getting worse and there’s always a new adventure around the corner. You really get to bond with the little family of friends that makes up the main cast and the haunting narrative will stick with you long after you put the book down.

The book ends on a sequel note and the author has confirmed he plans to write another book. I can’t tell you which characters will make it to the sequel, but I can tell you that it will be quite interesting and a slightly different perspective with some new characters, and a reintroduction of Chen, whom I mentioned before.

Truth’s Blood is a self-published work by the author, so snag yourself a copy and spread the word! Click the following links to see the book yourself. This story is about 470 pages long and available in both paperback and e-book format. The paperback is about $25, but the e-book is only $2.99!

See it on Amazon.

See it on Barnes and Noble

Do you have a book you’d like me to read? Email me at fencingwithink@gmail.com!

One thought on “Book Review–Truth’s Blood”