Yeah, you read that right: Tomb Raider, the new Lara Croft model on the PS3 and Xbox 360. A violent video game that has jack squat to do with Christianity. But one of the purposes of this blog is to see how art and Christianity combine in strange ways. The best of Christian inspirations can come from some bizarre places. Case in point: Tomb Raider.

Christian Disclaimer: I’ll ago ahead and say I don’t necessarily endorse this game. The violence gets an easy 9/10, but violence doesn’t affect me personally as much as sex or language might (i.e. I’m not becoming violent myself), and the violence is inherent to the plot’s gritty survival story (aka: it’s not there just to be edgy). But we’re all different, and if violence affects you differently or you have personal convictions against it, don’t play it. If not, have fun. If in doubt, ask God.

There are events in the game I like to call “Scramble Scenes.” Often in the game’s story, bad crap will go down and you have one objective: RUN! Whether the bridge you’re on is being blown up, whether bad guys are chasing you, whether you’re sliding down a river, stopping is not an option. The only thing you can do is MOVE your sorry butt!

These scenes are frantic and lots of fun. Run, jump, grab, run some more, climb, press this button right now, run, jump, just keep moving! There’s not a lot of complexity, just a high-octane quest to stay alive for the next 60 seconds.

In Christianity, there are times for complexities–many times, actually. Times for theological quandries, studies, discussions, meditations, and other smart-sounding words. In Tomb Raider, there are times for careful planning., times to study the surroundings to find secret entrances, carefully examine your weapon upgrades to see which is the most useful right now, watch the bad guys to see who you can take out without alerting the others.

But in both Christianity and Tomb Raider, all these mental complexities are thrown out the window when the Scrambling starts. Scramble Scenes reduce gameplay to the most basic platform controls: run, jump, climb. That’s it. Because that’s all you need to do: move. And when the Scrambles start in real life, things get just as simple.

When life hits me with a tire iron, do you really think it matters whether humanity is inherently good or evil? NO! All that matters is me getting back up and fighting back or running away!

When demons attack me , the origins of evil aren’t really important. All I need to know is that He who is in me is greater than He who is in the world (1 John 4:4).

When someone I love is talking about suicide, they don’t need my three bullet points on why suicide is wrong. They need love. 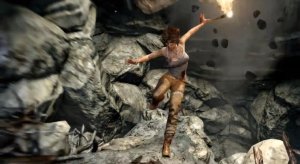 During one early scene in Tomb Raider, Lara garbs a torch, a valuable item in this game. Later on, she starts to fall down a cliff and she has a split-second choice: keep the torch, or let go and grab the ledge. Wisely, she drops the torch. True, now she’s in the dark and has one less weapon, but that doesn’t matter. Life is more important. A new torch can be found or made; you only have one life.

When “stuff” happens, when you’re scrambling just to stay alive, you don’t weigh yourself down with extra theology, you drop whatever is in your hands and grab on to life. Sometimes the Devil will attack and all you have to do is hold on to your faith. There’s no magic formula or special reasoning; the only thing you must focus on is keeping your passion for Christ alive.

How? Here are the few “buttons” you’ll need to press in these times.

But in all these things, remember that standing still is not an option. “Fight-or-flight” doesn’t have a “stay” option because in times like these, hesitation and neutrality are rewarded with death.

It takes high amounts of endurance and courage to live through these times. But when the bridge is being blown out from underneath you, you’ll find both of those things when you make one very, very simple choice: MOVE!