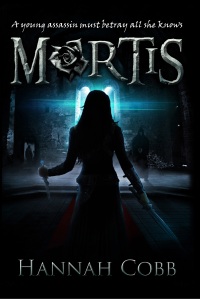 Summary: Mortis is a school that trains children from birth to become assassins. It’s a place where death is so commonplace, no one even questions its morality. Except Jane. Though she begins as callous as the rest, Jane begins questioning whether killing is right or wrong. When she finally sees the depths of her school’s evils, she runs away. Now, with assassins on her heels, Jane faces a choice: run away and live, leaving dozens of children to the dangers and evils of Mortis or destroy the school and everyone she loves with it.

THE STRENGTHS: The characters are the best part. Pretty much every single person has some interesting tidbit about them. Jane is a powerful, but likeable assassin. Willy is like the clumsy, but strong anime sidekick. Felix is the bad boy you want to like. Sapphire is a coy manipulator. Nathan is the one person of honor in this cast. On and on. The cast is a likable enough group that you really don’t mind reading about them.

There’s also a death scene in Act 3, and while the scene itself has problems, the lingering emptiness is well-defined and you really feel for the characters and feel the loss yourself.

THE WEAKNESSES: Mostly scene building and a little world building. As I read, I would often wonder, “Where am I, exactly?” This was most evident in the school, Mortis. There aren’t a lot of great descriptions and key details are sometimes left out, so the reader has to backtrack several times and gather their bearings. For example, in one chapter, they go to a class in an underground lake. then someone’s leaning on the rigging of the ship. Wait, there’s a ship, too? The description only said there it was an underground lake. This makes for a slightly clunky read. Also, it’s not quite clear what the “rules” of Mortis are. How does it exist? If people can kill each other willy-nilly, how do you have any students left? How exactly do students see in pitch blackness?

In short, a lot of things aren’t explain very well and so the reader is left with a lot of questions. There are some seemingly immortal characters in this story and they aren’t explained at all; they’re just all-powerful creatures. And yet one of them is defeated far too easily. Also, Jane has a mysterious power to go invisible. How, exactly? We’re just supposed to go along with quite a bit and disbelief is precariously suspended.

FINAL THOUGHTS: It’s a bit of a confusing read and I didn’t like that I had to often stop, go back, and try to understand a second time, if I could. However, the characters were likable enough and the world of assassins had enough punch to keep things interesting all the way to the end of the book.

The book ended with an eye on a sequel, so if you like the book, be on the lookout for that.

You can find the book on Amazon and Barnes and Noble.

Barnes and Noble doesn’t seem to have an e-book edition, but I could be wrong. Amazon does, however, and it’s the cheapest option by far. $3 vs $14.

Did you agree with this review? Do you have a book that you’d like me to review? Let me know!