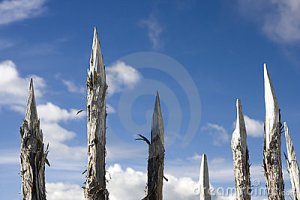 The house looks like Abe Lincoln’s death trap. A little log cabin where every log, rod, and stick has been fashioned to a razor point, like a wooden porcupine, laced with flecks of something black and silver. Even the sidewalk is covered in wooden nails jutting out at every angle so that there’s only one thin path to tread towards the door. I make a slight misstep and poke my calf on one of the spikes. The lawn is nothing but even rows of little wooden spears.

It’s no wonder there are no neighbors. Just the lone house, though it’s on the main stretch of road. Anybody can get here, but who would want to? I had to park on the street to avoid slashing my tires in the driveway. There’s a pick-up truck in the driveway and long, thin tracks to drive between spikes. More spikes sit in the truck bed. Why all the vampire sticks? I’m here to find out.

The owner is a man who calls himself Uncle Sam, and he sounded quite friendly on the phone. He welcomed my request to interview him on his pincushion house and even allowed me to bring my camera. He asked me to come alone, though, simply because there’s only room enough for one visitor at a time. I can see why.

I stare at a door and a hundred wooden spikes glare back. There’s a thin opening where I can scarcely reach in and touch the knocker. Actually knocking is like one of Jigsaw’s games. The door opens and a heavyset man stands on the other side with old, worn blue jeans, a white-and-red shirt covered in sawdust, and a blue ball cap with a star on the front. He has wild white hair and a white beard that curls with his smile. He also has a crossbow with a quiver of wooden spikes.

Uncle Sam invites me inside and I almost tell him no. The inside of the house is just as spiny as the outside–if not more so. Spikes all along the walls, the ceilings, the counters, the cabinets, even the floors, save for a a few thin walkways that lead throughout the house. Sam himself seems to have a hard time getting around, his large body nearly brushing the spines. I shudder to think what the bathroom must be like.

Sam shows me to a chair, thankfully spike-free. I sit and relax in the one place that looks comfortable, but I do not touch the razor-tipped coffee table. Sam takes a chair across from me and we exchange pleasantries. I start my camera and begin the interview.

ME: I guess I’ll just start with the obvious: why all the spikes?

US: I’m surprised you have to ask. Isn’t it obvious? I mean don’t you just feel so very safe here?

US: Of course! Nobody’s going to come crashing in and hurt us in here, are they?

US: And that’s the point! No pun intended. [He laughs and takes a spike out of his quiver.] This here is a little prototype. I actually make them in all sizes, as you see. Sharpened to a perfect point, and once they’re in, they’re nearly impossible to get out. I call them L.A.W.S. Stands for Lead-Augmented Wooden Spike.

ME: Did you say lead?

US: That’s right. See, wood isn’t quite enough. Wood can be broken, you know, and then someone could break in and hurt us. So I figured that I’d add a deterrent, make anyone who breaks my L.A.W.S. regret it. Even touching them runs the risk of lead poisoning. So every spike is made with pieces of lead to make sure if anybody messes with them, they suffer to the fullest degree.

ME: [I am thinking of the pinprick on my leg.] That sounds extremely dangerous.

ME: But you have spikes on the inside, too. You can barely even move around.

US: True, but the same goes for anybody else. Anybody wants to come inside, they have to walk on the path I prescribed for them. If they don’t, they suffer. So even if intruders break in, they can’t get around and they’re just lined up nice and pretty for me. [He makes a gesture of shooting somebody and laughs.]

ME: But what about yourself? Isn’t it a terrible inconvenience?

US: Not really. There’s enough room to move about. I spent a lot of time measuring the average man’s footfalls and made sure it was just wide enough for a casual walker. Why would you ever want to run inside, anyway? Unless you were trying to steal something or attack me, of course. Anyway, it’s the perfect standard width and there are straight and narrow paths to go anywhere you want to go in the house. As long as you stay on the right path, you shouldn’t have to worry about it.

ME: But what about accidents? What happens if you’re not paying attention or you slip?

ME: Okay, but it still seems like and inconvenience to me, not being able to move where you want to.

US: Why would you want to do that? All my paths lead you everywhere.

ME: Yeah, at a perilous risk, though. Aren’t your daily functions limited?

US: Only to what I need to do. What do I need all this extra for, anyway? However, you do bring to mind one little inconvenience. It is a little tricky to eat. [He pats his big belly.] That may be hard for you to believe, but what I mean is I can’t cook my own stuff anymore. I have to order out every day. Chinese, mostly. They got little hands, see, makes it easier to knock. All the more convenient for both of us.

US: I mean, I’ll admit I miss my own homemade apple pie, but I had a couple revelations that set me right. One: kitchens are dangerous anyway. All the heat and sharp utensils. So staying out is generally safer. I’ll probably seal the whole place off with L.A.W.S. sooner or later. Save me a bundle on the bills, too. Anyway, number two is that there are hundreds and hundreds of people who do absolutely everything in the world, so why do it myself when I can pay them to do it for me? I mean, I have the money, which leads me to number three: the less I have to do, the more time I can spend in my wood shop making new L.A.W.S. And the more I work, the more I get paid, so I can pay others to bring me food, do my finances, fix things, all that good stuff.

ME: Am I to understand that you get paid for making these L.A.W.S.?

US: I sell them, that’s my trade. You probably saw some in my truck out front.

ME: Who would buy a bunch of wooden spikes to line their houses?

US: People who want to be meticulously safe, that’s who! I’m getting more and more customers every day! I’m actually thinking of taking on an apprentice if you know somebody good with woodworking. Ever since the schools started buying, I’ve been a very busy man.

US: Yessir. They’re an exploding market, actually. I started selling once I noticed the rising bully problems. It’s gotten quite bad.

ME: I suppose I have to give you that one. My son is in first grade and a bigger kid pushed him down for no reason but to laugh at him.

US: There, you see? Children are precious; we want to keep them perfectly safe from any and all harm. So, I sold my L.A.W.S. idea to a few schools and they’ve already started putting up dozens and dozens of ’em. They’re ordering more every day. Big ones, little ones, all sorts. What’s the matter? You look concerned.

ME: I’m just thinking that kids like to run around and be silly. Wouldn’t they hurt themselves?

US: That’s the point. You put enough L.A.W.S. in place, kids start hurting themselves whenever they move the wrong way. Keep it up and you’ll soon have entire schools full of orderly kids walking in nice, straight lines. And see, when they grow up that way, with L.A.W.S. poking at every side, when they finally leave, they might even be able to keep walking in a straight line even when there are no L.A.W.S. That’s the hope, at least, but we’re not sure we’ll ever get there.

ME: So you’re actually selling these to schools right now?

US: And churches, too.

US: Oh yeah, my number-one customers. They’re all about the straight-and-narrow path, so making it literal helps keep people in line. Churches have me on speed-dial! And even bring me casseroles and roasts and such. It’s a great deal! That’s why I’m looking for an apprentice. I’m up to my eyeballs in work and I’m only hoping to expand. Soon, we can have L.A.W.S. everywhere keeping everybody safe.

ME: Doesn’t that seem a little counter-intuitive? I mean, you could kill yourself trying to stay within the lines.

US: That’s the price you pay for safety. And what do you need to go all over the place for, anyway? All we need are pathways to where we need to go and fill every other space with L.A.W.S.

ME: Well, with all due respect, you can’t possibly fill every space, can you? You’ll always need places without them. I mean this chair I’m sitting in doesn’t have L.A.W.S.

US: Hmm, you have a good point there.

US: That chair is completely unsafe! Stand up, stand up, I’m so terribly sorry! I can’t believe I had you sit there! [I stand up, completely confused. Uncle Sam takes a pile of foot-long L.A.W.S. and starts stabbing the cushions with spikes, penetrating at all angles until he runs out and the chair looks like a medieval mace.] Well, I’ll have to make some more and finish later. But that’ll do for now, and there’s still just enough room to sit!

ME: No, thank you, I’ll stand. But actually, my point was that even among rows and rows of L.A.W.S., there will always be gaps between them. I mean, that’s they’re nature; they always come to a point, so there’s always a space, isn’t there?

US: I was afraid of that, too. But I just started making smaller L.A.W.S. to fit between the gaps. See, look around you. There are little spikes within the big ones so that there’s no wiggle room. Now how safe is that? Now, yes, there are still some gaps, but I’m working on that, making them smaller and smaller. In fact, take a look here. [He picks up what looks like a toothpick.] This is my crowning gem, the smallest one I ever made. You wouldn’t even see it unless you were looking for it.

ME: Yes, people would cut themselves without knowing why.

US: Exactly. And the fewer gaps, the fewer problems. If it were up to me, I’d fill every school, every church, every business, and every building with L.A.W.S. I want everybody to be safe! [Sam leans over and points his finger at me.] I want you to be safe! Here, take this one as a souvenir. [He hands me the toothpick.] Beauty, isn’t it?

ME: It’s certainly–[SNAP! The ultra-fine wood snaps in my fingers without me even trying.] Oh my gosh, I’m so sorry! I didn’t mean to–[I freeze at Sam’s glare. He’s bristling like the rest of his house. I look at the crossbow strapped across his back, and the quiver of L.A.W.S. I am afraid.]

2 thoughts on “L.A.W.S. A Thinly-Veiled Metaphor for Bad Government”