That’s kind of a scary thought, isn’t it? Especially for us oh-so-patriotic ‘Mericans who stared down them Commies back in the day. Git ‘R’ Dun! But the USSR’s legendary attempt at Communism caused their own people harm and worried everybody else. So why am I even putting “Christians” and “Communists” in the same sentence?

Well, first of all, it’s the nature of Communism itself. Communism, if I may dumb it down tremendously, is basically a society that runs on everybody sharing. On its own, that doesn’t sound bad, does it? That kind of selflessness sounds utopian, in fact. And it sounds eerily familiar to a section about the early believers in the book of Acts.

“Now the multitude of those who believed were of one heart and one soul; neither did anyone say that any of the things he possessed was his own, but they had all thing in common. And with great power the apostles gave witness to the resurrection of the Lord Jesus. And great grace was upon them all. Nor was there anyone among them who lacked; for all who were possessors of lands or houses sold them and brought the proceeds of the things that were sold and laid them at the apostles’ feet; and they distributed to each as anyone had need.” (Acts 4:32-35)

Everybody pooled their funds and resources, everybody shared, and the power of God moved wonderfully through them as the rest of Acts showed. That kind of sounds like Communism, doesn’t it? And the Bible makes it sound like a good thing. So why the heck did it fail so horribly in the USSR?

First of all, corruption. Stalin cut his people off from the rest of the world and filled them with propaganda. That’s no tenant of Communism; that’s tyranny. But even without corruption, it would have failed because they messed up one of the core components of their own beliefs: they tried to force it.

The whole point of everybody sharing is that it’s done willingly. People abandon their selfish desires and give what they have to fill a need. In return, their needs are met by another in the community. But when you force it, the morality shatters. People don’t abandon selfishness when you tell them to; attitudes aren’t changed that way. So now you have a system of humility run by people who haven’t humbled themselves. The result? Disaster.

Where Communism went wrong was trying to make it a government status instead of a social one. A humble system has a loose leadership structure and a government, by nature, must have some sort of strictness. The government can certainly facilitate, finding resources for needs, watching out for abuse, etc, but it can’t be in charge.

All of this is why Communism worked for the Apostles. They didn’t go to the Jewish leaders or the Roman ones and try to instill a new order; they simply made one amongst themselves. And while they compelled others to live this way, it was never forced, even when it most seemed like they did. 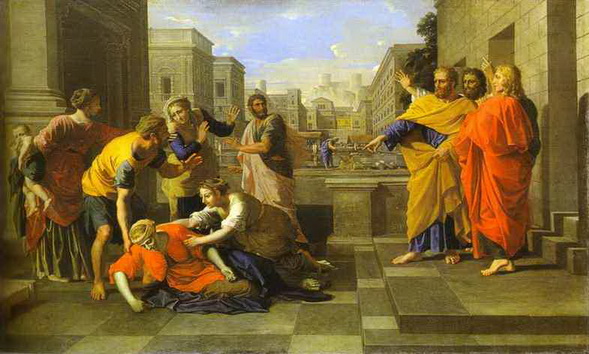 In Acts 5 Ananias sold some land, but held back some of the proceeds and God struck him dead. An interview with his wife, Sapphira, shows that the crime wasn’t that they didn’t share, but that they’d lied. Peter even told Ananias, “While it remained, was it not your own? And after it was sold was it not in your own control? Why have you conceived this thing in your heart? You have not lied to men but to God.” (Acts 5:4) The meaning here is that Ananias’s stuff was still all his; he didn’t have to give it away. God didn’t really mind him keeping what was his, but he absolutely detests falsehood, and would have none of it crippling his still-new church.

You can’t force people to be good; that’s not good, it’s merely compliance. 2 Corinthians 9:7 says that everyone should give according to what he’s decided in his heart. So the solution to selfishness is changing that person’s heart, which leads me to my final point:

It only worked because Jesus was in it.

The early church had been born again, and this meant that Christ dwelt in their hearts, working through them. (Gal 2:20) That was how humility trumped selfishness: Jesus shone through human flesh. That’s how they could “be in one accord” because Jesus is one. (Deuteronomy 6:4). He touched their hearts and they gave him everything, and only when they’d done that could they give everything to everyone else, too.

So no, I’m not calling for government reform or social reform. I’m simply saying that when God dwells in the hearts of a group of people, there’s no need for rules and reformation; the good happens naturally.

4 thoughts on “Are Christians Supposed to be Communists?”