Perusing the Christian section of the bookstore, I’m always on the lookout for a book that isn’t a period piece, sports drama, an allegory, or a political/police thriller. That usually leaves me empty-handed (which is why I’m writing my own, shameless self-promotion), but this time, I found Billy Coffey’s When Mockingbirds Sing and gave it a go. It turned out to be a simple, yet exciting little story well worth the read. 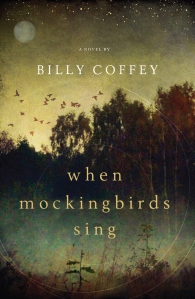 SUMMARY: The Norcross family has only recently moved into the little southern town of Mattingly, and they’re trying to fit in. But their daughter, Leah, claims she can see a “Rainbow Man” who helps her paint gloriously-detailed pictures that turn out to be prophetic. It’s exciting at first, but they soon grow darker and stranger and everyone begins to wonder if Leah’s Rainbow Man is actually God or the Devil.

STRENGTHS: The book’s big strength is its simple goodness. It doesn’t try too hard to be anything it’s not and settle comfortably as a simple story. It’s the kind of book you can trust. The town and inhabitants of Mattingly are slowly and carefully set up, but as the book goes on, the pace gets quicker and things go from sweet and calm to absolutely insane. There’s plenty of mystery about this Rainbow Man and a lot of realistic and likable characters to spend time with. And the writing itself is a gem with great little phrases and word choices scattered throughout.

There’s also a unique spiritual struggle. A pastor is so concerned with the still-small voice of God that he can’t hear the loud voice of God. You don’t often see it that way around, so I liked the freshness. Speaking of messages, the novel does have a few, but it’s not so insecure that it slaps you in the face with them. In fact, the book ends on some unsettling notes, but it’s realistic in the context. The message and story weave together without one choking the other, which is the mark of great Christian fiction.

WEAKNESSES: Sometimes, the descriptions get in the way of the story. Mockingbirds is a slow burn, which is fine, but even so it can get bogged down in details. This is doubly true when the story picks up the pace towards the end yet descriptions can still slow it down. Yet for all that, Mattingly seems a bit incomplete. It’s not that it’s empty and hollow, but that there seems to be an uncomfortable side of Mattingly that is more told than shown.

There were also some heavy allusions to some big, supernatural event in the past, but it’s never explained. It turned out to be a teaser for the sequel, The Devil Walks in Mattingly but it felt unnecessary. The teases were great, but it turned into an end-credits scene that went on too long.

FINAL VERDICT: The strengths outweigh the weaknesses. It’s simple, but not boring, telling, but not preachy, exciting, but not flashy. The mystery is nice and the author doesn’t over-explain himself. He’s just telling a story, and a good one at that.

NOW GO READ! You can buy When Mockingbirds Sing at Amazon (click here) or Barnes and Noble (click here). You can also see more about author Billy Coffey at billycoffey.com.

WHAT’S NEXT? Do you have a book you’d like me to review? Or perhaps you’re working on something and would like a writer’s feedback or even a helpful critique? Click here or email me at fencingwithink@gmail.com.