This is a continuing series. As I am rapidly “growing up” I find less and less time to play video games, so I’m celebrating my top ten favorites over a lifetime of playing and the impacts that games have had on me. See Number 7.

Let’s start with the obvious: the game is just fun. Final Fantasy is a great game series (despite an increasing volume of stinkers), and they translated their stylistic battle into an action RPG that is seamless and exciting. If you’ve played the game, you’ll know what I mean when I say menus and action never worked better.

Actually, if you’ve played the game, you’re probably wondering why I picked this one over others in the series. After all, Kingdom Hearts 2 was vastly superior in terms of gameplay, camerawork, graphics, and style. And Birth by Sleep had some high story moments, too. Both of these things are very true, but sadly, the franchise has deteriorated rapidly in terms of storytelling. Mistaken identities, amnesia, time travel, and a host of retrospective rewrites, not to mention terrible mood-killing “humor.” KH1 wasn’t as flashy, but it was simpler, and it worked better that way.

But do you know where KH1 really outclassed the other 36 games in the series? (Seriously, it needs to end.) The weaving of the universes. You travel the cosmos hopping from world to world, most of them the worlds of Disney movies, beating up baddies and helping the Disney heroes. The writers were, for the most part, masterful at blending the Disney films with the game’s Final Fantasy-style plot.

For example, when the Red Queen of Wonderland is attacked by the baddies, she blames Alice. Why? “Because I said so, that’s why!” Right there you have the antagonists at action, but it’s still Wonderland foolishness. When you visit The Little Mermaid, Ariel doesn’t yearn for the surface, she years to visit other worlds (Part of Your World, anyone?). That cut out the love story entirely, but it was a good sacrifice to fit the game. Hercules’s coliseum hosts monster tournaments. Genie, being a genie, can be summoned by magic to fight with you. Captain Hook’s ship doesn’t just travel between Neverland and London, but between all worlds.

Speaking of which, where else can you see Hades, Jafar, Ursula, Oogie Boogie, Captain Hook, and Maleficent all hanging out together, plotting evil? Or on the other side, Squall and Yuffie in the same game? Or Hades talking to Cloud Strife?

These geniuses somehow worked these two completely different universes into the same game and made…it…WORK! And they weren’t afraid to bend the rules just enough to make it work. The game only had four original characters: the lead character, his best friend, the love interest, and the main villain. Kingdom Hearts knew that it couldn’t just have Disney and Final Fantasy together, but it had to balance the two, along with its own plot. 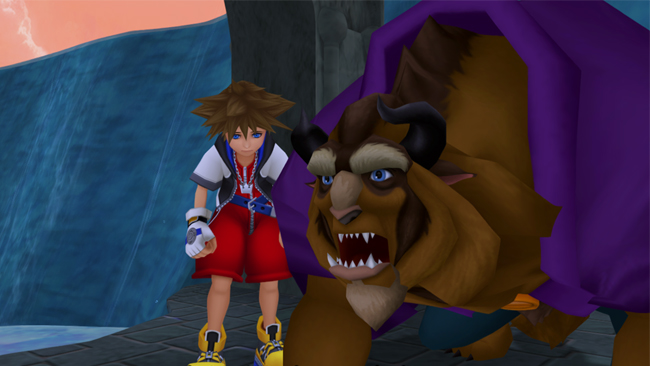 Sadly, future games just couldn’t pull that balance off. Sometimes, Disney worlds were empty and meaningless, nothing more than obligatory cameos that had no real relevance to the game. Other times, the game gave up on creativity and just had you play the movie with your characters just kind of hanging around doing little of importance and squeezing 90-minute movies into half-hearted 30-minute crunches. Even Final Fantasy characters got squeezed into tiny corners. Disney villains became little more than joke bosses on your way to the rest of the game. Actually, that about sums it up. The future KH games became a jumble of Disney and Final Fantasy clusters that got in the way of the actual game. They lost sight of their original beauty.

So while Kingdom Hearts 2 did cling to the old magic to a certain degree (Hades, Lord of the Dead summoning the undead Auron? GENIUS!), Kingdom Hearts clearly put more emphasis on the coexisting properties and how they weaved together to form a totally new story. Adaptations are rarely done well, as are video games based on movies. But Kingdom Hearts had a magic to it, the combined magic of Disney and Final Fantasy in their prime. It’s a great game that I’m not ashamed to play, even though it has Mickey Mouse in it.

QUESTION: KH fans, what was your favorite KH game and why?