In honor of Halloween, the holiday when most Christians lock their children in a Chick-fil-A parking lot so they can trick-or-treat for sugar-free vegan candy out of the same trunk that holds the spare gasoline, I thought it would be a little fun to talk about our stupid, childhood fears. We all have at least one thing that freaked us out as a kid and even  though we’re grown, it still gives us the willies.

To jog your mind, I’ll include some of mine because I have several. Maybe laughing at me will help you feel better about yourself. Most people seem to think so.

Yes, you read that right. Muppets freaked me out. I don’t know why and it’s not like Kermit and Fozzy keep me up at night. But something about those soft, flap-jawed puppets still seems otherworldly to me. I don’t know why. Maybe it’s because my uncle used to entertain kids with muppet-like puppets and had a whole shelf full of various animal-type creatures who would stare at you with their giant wide eyes unblinking their their velvet mouths hanging open for eternity like they longed to suck out your soul. Or maybe because I had a Sesame Street nightmare when I was a kid.

Or maybe it’s because of this next entry.

THE BELL FROM “A MUPPET CHRISTMAS CAROL”

I actually applaud children’s movies that aren’t afraid to be scary and this is probably my favorite rendition of the Dickens novel. But still…scary stuff. Yeah, there’s the creepy Ghost of Christmas Yet-To-Come, plus the  door-knocker-turned-to-Muppet (my childhood never had a chance), but the only part that still gives me shivers is the ringing bell. Heaven help me, I can’t find a clip, so bear with me.

Scrooge has just been weirded-out by the Muppet-doorknocker and is trying to calm down. Then, a little bell rings. He looks up, sees nothing, and assumes he imagined it. Then…ring-a-ling-a-ling-a-ling-a…the bell shakes hard on its hinge as some unknown force rings it over and over. All the while, a ghostly wail screams softly in the background. The bell stops all is quiet.

The unknown can be scarier than anything. After all, once the Marley brothers show up, it’s all a good laugh, but that moment is still terrifying. 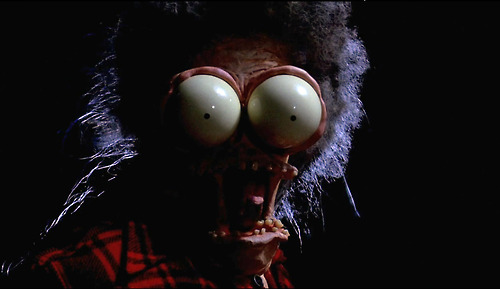 Look at that picture. LOOK AT IT! That is the face of Hell, of fear, of all that is wrong and horrible with the world. Her name is Large Marge.

“Pee Wee’s Big Adventure” is a fairly dark kid’s film, but what can you expect with Tim Burton at the helm? He takes his wacky, kooky character down some pretty messed up places, but this…oh, lord, THIS!

Stranded by the road at night, a woman picks Pee Wee up in her truck, then begins telling him about a horrible car wreck she once saw. “And when they finally pulled the driver’s body from the twisted, burning wreck, it looked like…THIS!” Then she makes that face.

In case that wasn’t freaky enough, when she drops Pee Wee off, she says, “Be sure to tell ’em Large Marge sent ya!” And when he does, the bartender says it’s impossible. Then he proceeds to tell Pee Wee about this horrible car wreck he once saw…

Click here for the clip, if you dare. Go to about the 1:20 mark for the face.

Carman was and is one of my favorite musical artists of all time, especially considering he’s a Christian and Christian music is equivalent to elevator muzak. On his “R.I.O.T.” album, he had a song aimed at kids called “No Monsters” which basically said that kids don’t have to be afraid of evil because Jesus is bigger than evil.

And he did that by freaking the crap out of me.

The first thirty seconds or so of this track are actually just a bunch of creepy sounds. (Click here for the track) Wolves, smoke hissing, other noises of the night. A little chilling, yes, but for some reason, when I heard this as a kid, it was always at night. Every. Freaking. Time. My mom used to play the tape (remember those?) on trips and I just remember her hitting play and then hearing those sounds as I looked out into the inky blackness of the night. We lived out in the country, so not many lights broke the darkness. And I was a very, VERY imaginative kid.

But the music video made it worse. It begins by playing out as a cheesy horror film from when Carman was a kid. The car breaks down in the woods at night and Dad goes to find help while the family stays behind in the car. Oh, and there’s an escaped madman somewhere. But when the creepy sounds start playing, it shifts a little. Then, something moves in the background. And suddenly…a man with an axe roars at the window. Everybody screams.

That jump scare did me in as a child and I know it’s silly now, but childhood fears tend to stick. I watched the music video in reference for this list and yeah, it still made me shiver. I’m twenty-freaking-six.

SO WHAT ARE YOURS?

I know I’m not the only one. Who still gets weirded out by something that scared them as a kid? Maybe a clown, a song, a movie clip, something. Don’t worry, we won’t judge here. Let’s just have a little fun together.

Fun Fact: My wife’s is a opening a can of biscuits. She wishes I hadn’t written that line.

So…what silly childhood fear still hold even a little sway over you? GO!

11 thoughts on “What Silly Childhood Fears Still Genuinely Terrify You?”