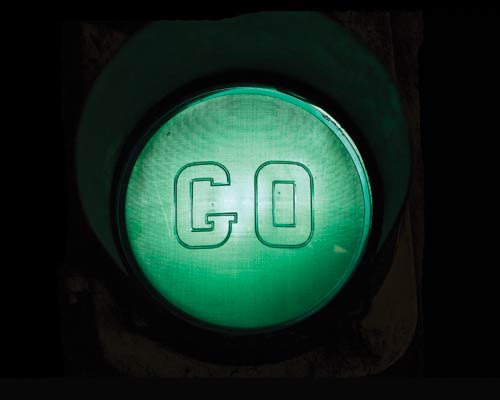 Did you ever play Red-Light, Green-Light as a kid? A row of kids line up and someone else calls out orders. If he said, “Green light,” you could moved, but if he said, “Red light,” you had to stop instantly or you’d be out. Now the point was to cross a certain finish line, so it’s kind of like a race. You want to move quickly to beat the other kids, but the faster you moved, the harder it was to stop on “Red light.” That was the thrill of the game.

Has God ever played Red-Light, Green-Light with you? Or people you know? I’ve seen it happen often. With God, it seems to be 100mph or dead stop. The Israelites wandered 40 years in the desert, then when God said “Green Light,” they conquered the Promised Land almost without a hitch. David was promised to be king, then stayed in with the sheep a while longer, doing pretty much nothing kingly. Then he found an opportunity for fame with Goliath and he went on a roller-coaster ride he WISHED he could stop. And that continues to this day. God says “Stop entirely,” or “Run like the wind!” or at least, so it seems.

Normally, we think more about the Red Light scenarios, the times when we have to be patient. Boy, do we hate patience, so we hate when God tells us to sit perfectly still. We have tons of sermons, books, and blog posts about the times when God is quiet, when we’re waiting, when nothing seems to be happening, but God has a plan.

But what about when God says, “Green light”?

My son was born last night, November 20th, 2014. His due date was Christmas. Five weeks early. Now, this was my first child, and everyone said first children take longer to cook. Well, God has his own plans. I came home from work and my wife basically said, “Hey, I’m in labor!” We wanted to have a natural birth at a birthing center because hospitals make my wife uncomfortable, but at 35 weeks, the midwife said it was too risky, so we went to the hospital. We still got to have the unmedicated birth (besides a few necessary antibodies), but all our plans went out the window in favor of God’s.

And like I said, when God moves, he MOVES! Not only was the kid 5 weeks ahead of schedule, but the entire birth, from first labor pains to delivery, took less than 12 hours. That’s a very low number for a first birth. We were only in the hospital maybe 8 hours. My wife started at 1 centimeter and you need to be at 10 to push. She hit 7 cm at about 11pm. At 11:30, she was ready to push. It was a race to see if the doc could even get there on time! He was born before midnight. Even my wife’s recovery has been speedy, and the baby is doing very well for a premie. My head is still spinning from the sudden labor and delivery, but God apparently said, “Now!”

We Christians don’t think much about the “Green Light” moments, when God suddenly says, “Get up and run. NOW!” We get so accustomed to sitting still and waiting on God that we’re thrown off balance. Worse yet, we think it’s not God telling us to move, but the Devil or our own thoughts. We can’t believe that God would go from 0 to 100 so fast. That happened to my parents. They tried to sell their house for 2 years, but God kept saying, “No.” Then, one day, God told them to put the house on the market. They did so on Wednesday and sold the house on Monday. In a recession. They knew God would move, but not so quickly!

But why shouldn’t he? He’s God. When he’s ready, he needs no further preparation. It’s time. God says so, thus the universe moves out of his way. This is what Jesus meant when he said that he’ll come back like “a thief in the night” and that we must diligently watch for his return. When he’s ready, it’ll be sudden. In every aspect of life, when God says, “wait,” he also means, “be ready.” Israel knew it would conquer the Promised Land and had to be ready, so the older generation prepared the new one. David knew he would be king someday, just not yet, so he built his relationship with God while tending sheep.

Thank God I was ready for William, my boy. My wife and I felt it was smart to prepare for the baby early instead of procrastinating. So we had everything ready. Crib, clothes, diapers, toys, everything. When the hospital releases him, he’ll have a home.

Red Light moments suck, but the best advice I can give you is to prepare for the Green Light moments. Maintain and grow your relationship with God. Do what things you know to do at all times (love people, serve the unfortunate, respect parents, etc), and ready yourself for when God says, “Green Light.” That’s why I have this blog. God gave me an artistic gift, so I started this blog to practice my writing so that when God says it’s time, I’ve been faithful with my gift and I’ll be ready at his command.

God makes things happen, but we still have to be good stewards with our time and gifts. So tell me, are you ready for the light to turn green?