Okay, so I know this book came out like two years ago, but that was also the point I officially ran out money. I knew of the library’s existence, but somehow didn’t connect the dots. Anywho, I still think it’s good to give a shoutout to good art. Right now, that means Frank Peretti’s most recent novel, Illusion. 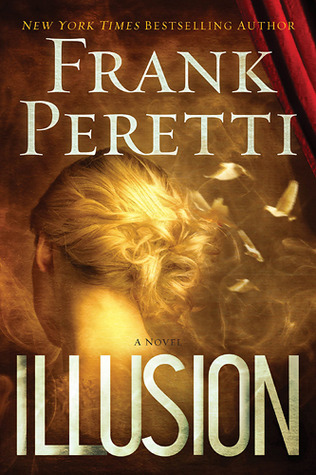 Dan Collins and his wife Mandy were famous stage magicians for forty years, then a car crash took Mandy’s life. Recovering from his loss, Dan thinks he’s going crazy when he meets Mandy again. At age nineteen. She doesn’t know him, but he knows it’s her. Stranger still, her stage magic doesn’t seem staged at all. In fact, it looks alarmingly real. As Dan digs further into this mystery, he finds he’s not the only one. There are others, others who know why Mandy seems able to do real magic, and they’ll do whatever it takes to stop her.

Frank Peretti has been my favorite authors for a long time. Two of my very favorite books are his: This Present Darkness and The Oath. Even his more modern works like Monster  and House (coauthored with Ted Dekker) are solid pieces. Peretti has a knack for tension and mystery and this book has a fair amount of both. However, Illusion gives him a chance to shine in a different area: relationships.

Peretti’s characters have always been well-written, but they’ve never been truly memorable like Harry Potter or Gatsby or Gandalf. This seems to be because his novels focus more on plot and/or message. Illusion takes frequent breaks from the drama and mystery to shine the spotlight on Dan and young Mandy and they make the story.

The characters are truly likable and their relationship is complicated, but beautiful. The audience knows from the beginning that 19-year-old Mandy really is the Mandy that 60-year-old Dan knew and loved. Somehow, she’s been transported from 1970 to 2010. She hasn’t yet met her Dan, but this older model still finds a way to captivate her. Dan on the other hand knows this can’t be Mandy, but somehow is and he’s drawn to her as he ever was.

I know, that sounds weird and creepy, but it works, and that’s a testament to Peretti’s ability. Watching them do magic tricks together is a delight and you yourself often forget how distant they’re supposed to be. Dan and Mandy don’t actually become a couple, but you know they’ve already fallen in love once and so it’s logical that they do so again. And the confusion the reader feels is exactly what the characters feel, and that, my friends, is good writing.

That’s the big win for the story, but the other aspects are good, too. As usual, the mystery keeps you going and the tension is tighter than a bowstring. However, don’t expect a constant action-packed thriller like most of his last works. Illusion is a much slower book, but not a bad one at all.

If I had to make one criticism, the book focuses so much on Dan and Mandy that for a while, it seems to forget there’s a conflict. The bad guys are established early on, but disappear for large chunks. Still, the charm carries the story.

Peretti’s religious aspects seem to take a sideline, though the characters are Christian and talk about God regularly. In an author’s note, Peretti says the story is a metaphor of Christ’s marriage to the church among other things. Quite honestly, I didn’t get that, nor any other Christian metaphor. But if you did, good. And a metaphor isn’t needed to make a quality piece of fiction. Frank Peretti has amazed me yet again and I’ll definitely be adding this one to my shelf.

CONTENT: PG–some peril, mild violence, and the romantic aspects may put some people off because of the age gap, but nothing truly inappropriate.