Last in a tribute to great Christmas movies is my personal favorite–and one of my favorite films in general. While a box-office bomb, this film turned out to be one of the biggest movies ever. It’s easy to see why.

A Break from Christmas Movies

Despite being hyped as a Christmas film, the film isn’t about Christmas at all. The last hour or so is simply set during Christmas. Even so, the film is about George and the importance of life and friendship rather than Christmas spirit or anything like that.

This is a huge relief to a lot of over-Christmas’d people. Many of us love to see those Christmas specials every year, so It’s a Wonderful Life is a welcome break in subject matter.

A Character You Can Root For

I personally love characters who go through trial after trial but come out the other side smiling. George Bailey goes through the ringer his whole life. He loses hearing in his left ear when he rescues his brother as a child. He’s smacked around when he does the right thing at the drug store. All he wants to do is get out of Bedford Falls and see the world, but he’s prevented when his father dies and he has to take over the company. He keeps the job later so his brother can get a better one. Thus, he gives up all his dreams so that he can help others achieve theirs. He gives up his honeymoon, his honeymoon money, and a job paying ten times his salary to save his town from the greedy clutches of Mr. Potter.

In the age of anti-heroes, George is a man we don’t often see in movies anymore. We seem to prefer more selfish people who are trying to get back at the world for not giving them what they deserve. George denies all his “rights” to the life he wanted and instead spends it serving and protecting and entire town, and in the end, he sees that all his effort was not only good, but greatly rewarded.

George is a true hero anybody can root for. He goes through Hell and nearly doesn’t make it, but he pulls through time and time again, always doing the right thing, even though it costs him something. Best of all, the film doesn’t spend too much time glamorizing George, it simply documents his heroism, the common struggles and heroic deeds of an everyday man, just like us. 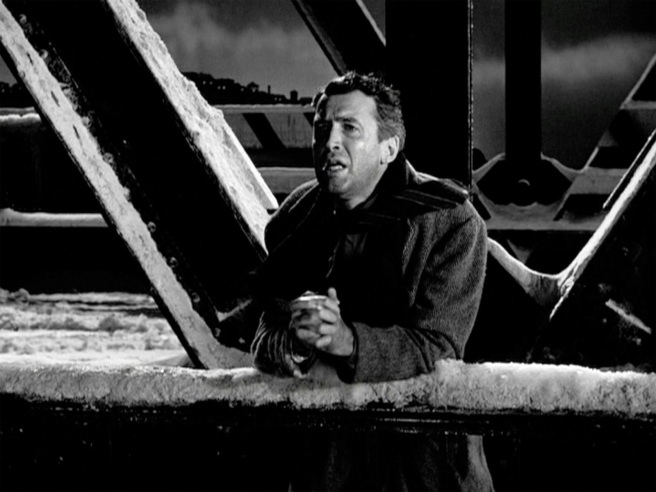 Most films have what’s called a three-act structure. First, there’s the setup, then the general story, then the climax and resolution. For example, in The Matrix, the setup is Neo getting out of the Matrix and realizing the real world. The main story is him living out his new life. Morpheus’s capture sets off the third act. This is a common storytelling feature and is generally harmless.

This film, however, makes the rare choice to break the structure. There’s no clear setup or main story, in fact the film plays more like a documentary on George Bailey’s life. However, there’s still a logical story thread, building layer after layer until the climax everybody knows: George’s contemplating suicide.

Films like this feel less like shows and more like journeys. You follow the characters from one adventure to the next instead of foreseeing the traditional checkpoints of film. The Fellowship of the Ring is a lot like that as there’s no real “climax” since it’s only the first of three films. It just follows the journey. And when you take that journey with the characters, you bond better with them.

The three-act structure is not a bad thing, it’s just a familiar one, so you can generally figure out a movie’s flow pretty easily. Films like this one are a welcome break.

“You are now in Bedford Falls” says the film’s opening shot, and it really feels that way. The filmmakers treated Bedford Falls like a character as much as a setting and made sure the pivotal town really felt like just that: a town.

First off, they invested in the set. According to IMDB, the constructed town covered four acres of land, an incredible feat considering most films use  existing locations or much smaller sets. It included “75 stores and buildings, main street, factory district, and a large residential and slum area. The main street was 300 yards long, three whole city blocks!” (source). They even made up a new special effect for snow using firefighting foam to enhance filming.

But every good film town needs a host of characters. We have white collars, blue collars, shop owners, a cab driver, immigrants, rich men, poor men, and we get to see the progression of many of their lives, not just the main character’s. Bedford Falls grows and evolves, as do its citizens.

These touches create great world building, which sucks in the readers more. Again, you could compare it to The Lord of the Rings for taking the time to create a world both physically and emotionally, which makes for a far better film.

Boy, how do you make a happier ending than this? George sees how wonderful his crummy life actually was, that he played a pivotal role in his town’s history, that he rescued people from poverty, misery, loneliness, jail, and even death. And when George is the one who finally needs help, the town rallies around him, overwhelming him with money and love. The hero’s struggles finally produce the ripest fruits and every trial seems worth it. After such a journey, we truly have a reason to celebrate.

Despite the film’s happy ending, it often gets criticized because Mr. Potter never gets what he has coming for all his years of cruelty and never even gets caught for stealing $8000 from George Bailey. He gets away without a scratch and lives to be a villain evermore.

But I think those critics miss the point of the ending which was…screw Mr. Potter. The story was never about destroying Mr. Potter, but simply defeating him.  Potter can do whatever he likes, be as cruel and miserable as he wants, but he’ll never wrap his clutches around George Bailey, the shining beacon who refuses to give in. Even if they lived another million years, George would endure Mr. Potter left and right.

That’s how life really works, I think. You don’t always get to slay your giants per se, but if you can evade their blows or get back up every single time they knock you down, then that’s a victory. You may not ever knock them on their back, but you become immortal nonetheless.

In conclusion…It’s a Wonderful Life is one of the most beloved films of all time. While it’s a bit of a stretch to say that it’s really a Christmas movie, it’s certainly one of the best movies in film history because of it’s great hero, its dastardly villain, and all the side characters who fill up Bedford Falls and take us along its wonderful journey.

3 thoughts on “Best Christmas Movie: The Case for “It’s a Wonderful Life””