You: We were talking about that?

That’s what it’s like to encounter a bumper sticker.

Bumper stickers are the answers to questions that nobody asked. They’re just broadcast opinions. People who buy one essentially say to themselves, “I want everyone to know what I think about a particular topic, but I don’t have access to Twitter or Facebook. I know! I’ll stick it to my car! Now everybody knows what I think, whether they want to or not.

Seriously, when I see a car with a bumper sticker, I immediately think less of that person, even if I agree with their political/religious/social viewpoint. I agree that Jesus is Lord. I also think there’s a time and place to preach and the freeway is not one of them.

No One Cares. Do you actually think you’re going to change somebody’s mind with a bumper sticker? How shallow is somebody’s conviction that a Pro-Life bumper sticker makes them reconsider that 2:30 abortion? Are you hoping it will stir a lively debate? It won’t. And if it does, nobody’s minds will be changed. They’ll agree or disagree and that’s it. Bumper stickers are completely irrelevant to anything in life.

Oh, you voted for so-and-so in 2004? What a wonderfully recent conversation topic.

You ran 26.2 something or another? Here’s that compliment you were fishing for.

You’d rather be fishing? …THEN FISH!

You think all religions are stupid and you wanted complete strangers to know it? Clearly, you have the moral high ground.

You have a political opinion? So do I. Want to hear it? No? Oh, I see how it works.

You have five people in your family? Oh, great, you’re a moron and you procreated!

You have a comment on a hot-button social issue strictly publicized to tick off people with the opposite party? You’re an asshole.

The reason bumper stickers don’t matter is because they’re only meant to broadcast someone’s opinion. No discussion, no change, nothing but a voice shouting through a megaphone for absolutely no reason. It’s selfish when you think about it. The person with the bumper sticker doesn’t care if it helps anybody or does anything of value. They just want to talk. 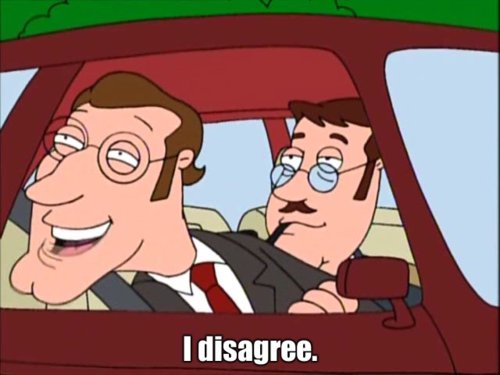 “But Facebook/Twitter are the exact same thing!” First of all, seeing someone’s opinion online won’t make me crash my car. Second, the internet is a better setting for such things. Discussion is possible, groups can form, changes can happen. That doesn’t happen at a red light. Third, you’re right. Anybody who wants to just shout their opinion out to the world as loud as possible without anybody speaking back is just as selfish or naive as they are on the road.

“But Mike, you have a blog! That’s the same thing!” Yes, I have a blog, a blog with a comments section, where I encourage discussion. I even give my name and a contact email on the About page. I’m not trying to drop an opinion and leave. Besides, you have to click on a blog to read it. Bumper stickers get shoved down your throat.

“But it’s Free Speech and I’m proud of my opinion!” True, but just because you have an opinion doesn’t mean anybody wants to hear it. Have a little wisdom to discern the time and place for whatever you want to talk about. Otherwise, you’re just talking about what you want to talk about whenever and wherever you feel like it, and that’s not only immature, that’s selfish.

“What about funny bumper stickers?” I give a little leeway to those because they actually try to make someone’s life better, not worse. However, those jokes get very old, very fast. “My other car is a Porche.” Ha ha.

Someone once said, “A wise man speaks because he has something to say. A fool speaks because he has to say something.” You want to talk? Then talk. Bumper stickers aren’t dialogue. They’re just drive-by opinions. So can we all just agree to stop spending money on them and actually talk to each other? Or does that bumper sticker man that you’re so entrenched in your opinion that you just want to cover your ears and scream what you think until the other person walks away?

7 thoughts on “A Rant Against Bumper Stickers”