Fans of superhuman and detective books, rejoice! Today, I’m pleased to have author Liberty Speidel here on Fencing With Ink to talk about her latest book, Omission, among other things. Special thanks to Liberty for consenting to an interview. You can read more about her at libertyspeidel.wordpress.com.

FENCING WITH INK: Tell us about your book series, the Darby Shaw Chronicles.

LIBERTY SPEIDEL: The Darby Shaw Chronicles follows a young police detective (if you guessed it was Darby, you’d be right!) as she learns that she has a unique superpower–to revive murder victims. As the series progresses, she has to deal with different aspects of what it means to be super and learn to deal with those who may want to take advantage of her powers as well as those who want to control her. I’m really trying to explore avenues I haven’t necessarily seen in the traditional superhero genre.

FWI: More specifically, Darby can only revive people within a certain time frame and only when she has the murderer in close proximity. That’s an awesome hook that makes way for plenty of mystery. What made you want to write about this concept?

LS: This is like my most-asked question. The original concept for Darby came from two things: my love for the superhero genre (which I didn’t actually realize I loved until the Marvel movies started coming out, even though I’d been watching movies and shows with superheroes most of my life), and the fact that when I was in the development stage, my hometown of Kansas City had had a very swift uptick in the number of murders that year […] My brain started mulling that over, and noted that for just about every other crime, there’s some redemption for the victim–a rape victim sees their rapist arrested, a theft victim gets their possessions back, etc. But there’s nothing like that for murder victims. The only solace is for the family–if the murderer is even caught. That had me asking some what-if questions, and I was off and running.

FWI: Tell us about the newest book in the series, Omission.

LS: Omission is the latest book in the series. In it, things are already rocky between Darby and her long-time partner, Mark Herman due to some things that happened in the previous story (Pursued, which is only available in my box set.) They’re trying to work through their ongoing issues as they investigate the murder of a DSHA agent. The DSHA is the Department of Superhuman Affairs, which oversees registration of supers and was party to the kidnapping of Darby two years earlier.

FWI: Intense. Now tell us about the woman who wrote these books.

LS: I’m a wife and mother. I stay at home with my kids and homeschool them, which at times is the dullest thing and at other times it’s got more conflict and tension than my own books (which is saying something since I like to throw everything and the kitchen sink at my characters!) I hold an Associate’s in Journalism from Butler Community College in my home state of Kansas, which I think influences my style of writing in many ways. I tend to have a bit of a “here’s the facts ma’am” attitude in my writing, not a lot of flourishes.

When I’m not writing, I enjoy baking (and since I have to be gluten free, this can be regular or GF), knitting, crochet, hiking, and take an interest in a lot of different forms of art. I’ve been trying to squeeze in time to learn to paint with Bob Ross, but that’s been difficult to find time for. I love landscape and micro-photography, and exploring the countryside near where I live in Northeast Kansas. 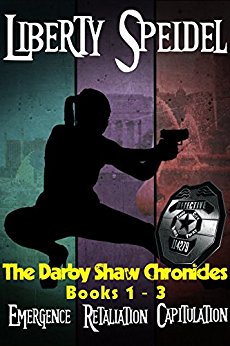 FWI: Do you have any particular reason for writing? Any certain message or idea, or just for fun?

LS: I started writing in my early teens when I got frustrated with how slow Simon & Schuster (I think?) was producing the Nancy Drew and Hardy Boy books that were coming out in the mid-late 90s. […] I started writing fan fiction around then and found I really loved it.

Now I write because I love telling stories, and I seem to have a knack for it. I don’t necessarily have a message I’m trying to get out, although I find it difficult to write a story without two elements: mystery and romance. I’m a bit of a romantic at heart, so most of my stories have at least something going on in the background. I think most of my books so far have at least one overarching theme: the battle of good versus evil. Usually have to have that when your basis for stories is a murder mystery.

FWI: You and I met at Realm Makers 2015, a conference for Christian Speculative Fiction. Why do you think Spec Fic is important in Christian circles or beyond?

LS: Speculative Fiction is important in not just Christian circles but the broader market (and I’m aimed for the general market, just in case there was any doubt) for a few simple reasons. They allow us to address issues that are affecting us now, but in a non-threatening, non-accusatory way. [Let’s say you have] Two books that discuss, say, human trafficking (which one of my hopefully upcoming releases is going to tackle). If you have one set in a contemporary setting, yes, it’s gritty, it’s nasty, and it’s very uncomfortable, especially if you have your eyes opened to the fact this type of thing is going on around you.

With spec fiction, while there can be just as much grittiness, and you can maybe take things farther because you’re in a different environment, the environment in and of itself means you have the chance to help remove your reader from some of the contemporary issues, but still get your message through. I think overall, spec fic’s advantage is the ability to address contemporary issues without necessarily pointing the finger at one group or another. […] The series also allows me to address issues about discrimination as superhumans are hated in some circles, and Darby has to learn how to deal with that.

FWI: Any particular books or authors who inspired you? Or just a few favorites?

LS: Before I started writing Darby’s books, I read a lot of Kathy Reichs, Janet Evanovich, and J.D. Robb. I’d say all three of these women authors were heavy influences in the early days of this series as I was starting to work on the concept. J.D. Robb and Janet Evanovich are still mentioned to me occasionally by readers as them seeing the main characters of Eve and Stephanie in Darby. I don’t see Stephanie as much as I see Eve. Lately, I’ve also started getting compared to Harry Dresden by Jim Butcher, and occasionally Alex Hughes’ series Mindspace Investigations (both of which I only started reading AFTER I’d published the first two books in my series!) I am totally in love with Harry Dresden now, and have read every book in the series, and am working on reading them again. While I don’t want to necessarily change Darby’s style, I am definitely reading the Dresden Files again right now to pay attention to Butcher’s attention to description which has always been my weakest area.

FWI: What do you want your readers to get from Omission?

I think mostly I want them to be entertained. But the subplot between Darby and her partner, Mark Herman, is one that I think holds some power as well, as they’ve been fighting due to both of them lying by omission to the other (see what I did there?). Their overall story in this particular book deals with honesty between two people who should have trusted each other from the outset, and I think it’s a good reminder in our own lives. It definitely is for me.

Also, I hope anyone who reads Omission is left wanting a little more since I’m working on writing the next book already.

Omission is available on Amazon.com.

If you want a taste of Liberty Speidel’s work, her first book in the series, Emergence, is FREE on the Kindle or Kindle app. Click here for that.

Thanks again to Liberty for stopping by. If you would like to have an author interview or have a book you’d like me to review here, click the Contact page up top and email me.