You’ve heard the hype, you’ve seen the posters, just WHAT is this anime thing all about?

Unfortunately, answering that question is like describing how the letter V tastes. I can answer, but it might not make sense.

Anime has become its own culture, and it can be hard to pop that bubble without getting even more lost than before. To put it plainly, anime is just animated TV shows originating in Japan. Genres, age groups, and styles vary per show.

So where do you start? I dare not tell you to just dive in. You might bump into Boku no Pico and run away screaming (never EVER watch that show).

Thus, I’ve decided to offer five anime that are best suited for people who’ve seen little to no anime in their lives, but want to try it out.

NOTE: This isn’t a “Top 5 Best Anime Ever” list. I’m only listing those that I think are helpful for new people, whether for ease of access or an introduction to a certain style. That means I’m also trying for a small variety of styles to please more potential fans. Finally, I’m only listing shows that I’ve personally seen to their completion and can say they’re at least “good.” If you STILL feel I missed something, please tell me in the comments!

Without further ado, here are (in no particular order) five anime for newcomers.

Spirited Away (or any Studio Ghibli/Hiyao Miyazaki movie) 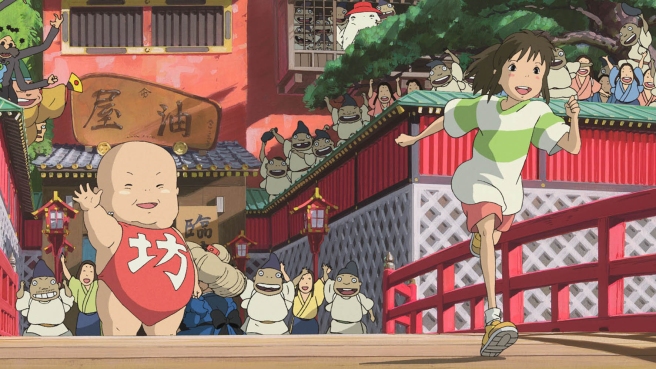 This is probably the single best starting point. First off, a movie is shorter than a TV show. Second, movies by Studio Ghibli and/or director Hayao Miyazaki are almost all excellent. Spirited Away is the most famous and best of the bunch.

Shy, frightened Chihiro stumbles into a spirit world, where creative creatures spring out of every corner and her parents have been turned into pigs. Chihiro must find bravery and friends to please the devious Yubaba, rescue her parents, and get back home.

Mystery, wonder, childhood, magic, creative settings, beautiful artwork, what’s not to like about this movie? This is also one you can watch in either Japanese or English.

If you want to stick with movies, nearly any Ghibli or Miyazaki movie will make you smile. Google them and have fun.

Let’s get one thing straight: anime is NOT just for kids. But how to prove it without gore, f-bombs, and nudity? Steins;Gate may be the best, most inoffensive answer (and no, you don’t pronounce the semicolon).

A self-proclaimed mad scientist accidentally creates a time machine with a microwave and a cell phone. He can now send text messages to the past to change it. As more people discover it, its creator uses the device to help people get the lives they want. It’s all harmless fun at first.

Then somebody dies. And no matter what he tries, the creator can’t change this event. He soon learns that every choice he’s made has brought about this inevitable outcome. The only way to fix it is to undo every person’s change thus far, undoing not only their happiness, but his own.

It’s a fun, trippy, hilarious-yet-serious adventure and once again, the English dub is actually awesome (a somewhat rare thing in anime), so you can ease yourself into it.

In the world of anime, there’s a genre called “harem,” where multiple girls fall for one guy and he romances them all until he picks one. Shenanigans ensue, also breasts. If that sounds like idiotic fanservice, that’s because it is. Still, dumb things CAN be fun.

However, Clannad is a harem anime that’s actually not stupid.

High-schooler Tomoya is going nowhere. His home life sucks, his grades are terrible, and an injury took away his basketball dreams. But then he runs into Nagisa, a girl trying to start a drama club so she can be an actress. He decides that if he can’t pursue his own dreams, maybe he can help her and others achieve theirs.

Now, the real joy to Clannad is its second season, called “After Story.” The harem part is over, now it’s just a romance and coming-of-age story where two lovers try to grow up and live life as best they can. But it’s a much harder journey than they could possibly imagine.

No glorified sexuality, plenty of genuine humor, and truly powerful emotional moments. I admit this is not a perfect anime by any means, but it’s a strong introduction to a popular genre and one of the best and smartest of that genre. 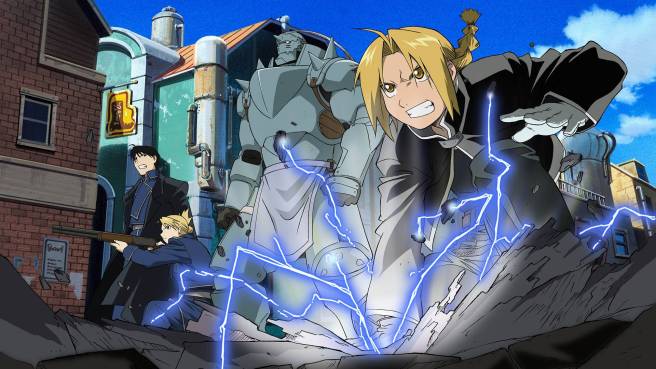 Important note: there are TWO shows called Fullmetal Alchemist. The first, just called Fullmetal Alchemist, got good reviews, but it was based on a graphic novel series (called manga) which was still in production, so the show made up its own ending. Years later, when the source material was complete, the show got remade under the title Brotherhood.

Brotherhood went on to become arguably the greatest anime of all time. Sometimes hysterical, sometimes horrifying, ever intriguing, and always amazing.

Brothers Edward and Alphonse tried to use the quasi-magical power of alchemy to bring back their dead mother, but everything went wrong. Ed lost his arm and leg, needing to replace them with metallic prosthetics. Al, however, lost his entire body, and now his soul is bound to a suit of armor. The brothers desperately search for the fabled Philosopher’s Stone to undo their mistake. Along the way, they’ll uncover the hideous secrets of their country and join an incredible cast of characters in saving the world.

This will introduce you to action-adventure anime, often lumped under the term “shonen.” (This isn’t a perfect categorization, but that would take a whole different post). Shonen anime are rife with action, but usually go on for HUNDREDS of episodes, which isn’t good for a beginner.

Lucky you, Fullmetal Alchemist: Brotherhood is 64 episodes long–a good length, but never slows down or sags, and knows when to quit. And once more, the English dub is excellent (in my opinion).

The Melancholy of Haruhi Suzumiya 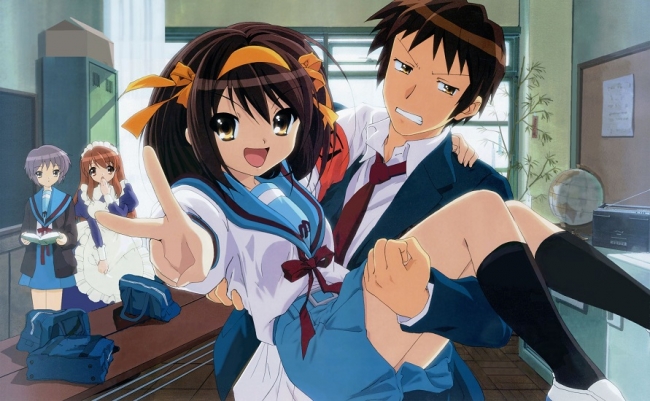 This may be the most intensive, yet important of my recommendations. Melancholy is not quite an “easy-entry” anime, but it’s one of the most beloved by fans. This anime isn’t just an introduction to the medium, it’s also an intro to the culture.

So if you’re the kind of person who would rather dive into a cold pool than ease yourself in, this is the choice for you.

Kyon doesn’t believe in aliens, espers, or time-travelers. Guess who he runs into. Yep, all three. But more imporantly, he meets Haruhi Suzumiya, a girl bored with life who just wants to meet strange and interesting people, so she recruits Kyon and the other weirdos into her special club to make life more interesting.

That’s when things get…odd, and not just in the plot, which goes to some amazing sci-fi and fantasy lengths that I won’t spoil here.

Melancholy had a bizarre facet: its episodes were originally released OUT OF ORDER. On purpose! Some fans say this is the “authentic” version. Others say the chronological order makes more sense.

Dear reader, I leave that up to you.

Of course, these are not prevalent in every single anime, but they’re some of the popular tropes, beloved by the masses. And if you watch this anime, you’ll get a trial-by-fire intro into the anime culture.

If nothing else, you’ll understand 15% more references than you did before.

There are so many amazing anime out there, and so many that I haven’t even seen yet. But the purpose of this list was to give you just a handful of ideas on where to start your anime search.

If you want more resources, I’ll give a few below. Search your favorite movie and TV genres and you’ll find something in anime. Check out reviews and TV ratings to see the quality and content of each show. Watch/read other peoples’ top-ten lists and see what’s popular and why.

Perhaps the best place to start watching anime is Crunchyroll.com (yes, that’s really what it’s called). Crunchyroll has tons of anime for FREE, and yes, it’s the legal kind of free. You have to watch ads, but it’s a good way to start watching anime without paying money for something you don’t know. PLUS, you can upgrade to a premium membership to skip those ads. You can also find some anime on Netflix, Hulu, and Amazon Prime, if you already have those.

I hope I was at least a little helpful with all this, and I hope that this will give you a foot into the wide, wonderful world of anime.

And if you ever get lost, just ask for directions. There are plenty of us here to help you.

FURTHER RESEARCH:
Myanimelist.net–reviews, rankings, and synopses of every show.
Anime-planet.com–“Browse by tag” helps you search by genre and more.
Crunchyroll.com–Watch anime and search by genre for ideas.

6 thoughts on “5 Anime for Newbies”