And it starts in your heart.

In order to help people currently going through addictions, I thought I’d share a few stories from my recovery. While they mostly apply to sex addiction, the base ideas can be translated to all addictions.

If you fix your heart, you can start (just start, mind you) the journey to true recovery.

I used to run in college (but I also used to watch the Matrix sequels, so there’s that) and one day I bumped into a friend of mine. For privacy’s sake, let’s call her Jill. We decided to run together.

Now running is a great litmus test for whether or not a woman is wearing a bra. Plus her headlights looked like she was smuggling Milk Duds two at a time. Once she noticed, Jill laughed.

“Oh, sorry. I’m just not used to wearing a bra. I used to be totally flat, but then I gained a little weight and now I have boobs! But I still forget to wear a bra sometimes. Sorry, but I’m just excited to finally have boobs, and they’re nice, aren’t they? Don’t I have nice boobs?”

If I wrote that in a novel, I’d be called unrealistic.

That was Jill, though. Playful, open, and a self-proclaimed nymphomaniac. She had no problem telling me her sexual preferences, ideas, and just how much fun she found sex in general.

And how she had a boyfriend.

Instead of saying, “You can use our friendship to get free stuff where I work,” she said, “C’mon, Mike, take advantage of me!”

However, she was loyal to her boyfriend, and thus not an option, and I could always act out any frustration on every demographic of pixilated women.

Eventually, I met Diana, who would become my wife and I fell in love at breakneck speed, so the idea of Jill faded into the ether.

Once I’d stopped seeing Jill as a sexual option, we became good friends (that’ll preach). One day, we ate together in the dining hall where she complained yet again about her boyfriend. Despite my advice and her best efforts over many weeks, it seemed the dude was a loser.

I told her to dump the jerk. If he didn’t appreciate her, he wasn’t worth her time. That got her to smile. “Thanks, Mike. You’re so great, you know? You always listen to me, you’re so nice, and such a great guy…”

Then a friend interrupted us by asking, “Is that your new girlfriend?” 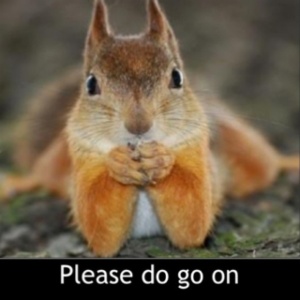 Her smile cracked. “You…have a girlfriend?”

“Well…that kinda takes away my incentive to dump my boyfriend.”

That kind of stuff just DID NOT HAPPEN TO ME. Girls didn’t leave their boyfriends for me. They left me to find new boyfriends!

And here was a girl, an attractive, carnally-minded girl who could look at me, know me, and still say, “I prefer you.”

Nobody preferred me. They took what they could get until something better came along. No woman saw me as their first choice.

Except Diana, of course. Since I was in love with her, I told Jill “Sorry” and that was the end of it.

Jill didn’t just want me, she hunted me.

Despite my obvious relationship, she would still flirt, draw attention to her “assets,” make suggestive jokes, and do everything but pounce. She made it quite clear she wanted me emotionally and physically.

The good news is I never cheated on Diana. Months later, I graduated college and never saw Jill again.

But I thought about her.

Jill wanted to leave her boyfriend for me. Jill pursued me. Jill couldn’t do without me. And Jill would answer all those carnal longings I’d built up from years on the internet.

I thought it was just my libido talking. Diana was a good Christian girl and we waited until marriage. But even after we married and things got AWESOME, I still thought of Jill.

Why? I loved Diana. She was great in the physical sense. And she clearly adored me in all the ways I wanted.

But that’s the thing about addictions. When something’s wrong with your heart, enough is never enough. When you get that thing you’ve always wanted, you want another.

It All Makes Sense

My heart hadn’t ever healed.

I was easy to ignore in school. All my friends were more popular in every way. The girls who did date me soon found other options. And even my longest relationship, two years, ended with shocking, debilitating ease on her part.

I was nothing. Nobody.

Except online. There, I had power. I could get any girl I wanted. But once I was addicted, one was never enough. I needed a new high every day.

But Jill took it a step further. Not only was she a sexual answer, but an emotional one. Someone who made me feel like a real man. The stud in all the movies and video games.

And I think that if I hadn’t lived so far from Jill, I wouldn’t have Diana today. And the more I obsessed over Jill, the more I talked to her, the more excuses I made, the more dangerous our relationship became.

I recognized that Jill and Diana were both perfect for two different versions of Mike. Jill was a dream come true for Mike the Boy, who needed a woman to validate his masculinity. Diana encouraged Mike the Man by pushing him to grow as a person.

I wanted to be a man, not a boy. That meant saying goodbye to an immature dream. In the case of Jill, it meant breaking off all contact. That act said, “I won’t let this control me. I refuse to feed the boy and starve the man.”

As for healing my heart further, that was up to God. I had to let him show me that I had value as an individual, that my old dreams wouldn’t satisfy, and that being a man is a lot more than just having the best girl.

That was the slow part. Describing the whole healing process would take one-hundred meticulous pages, but it starts with realizing what’s going on in your heart and taking steps to heal it.

But addiction is nothing short of medication. And like most medications, it treats the symptoms, not the cause. If you can heal the cause, you lose the need to medicate. You take away addiction’s greatest hold.

And then, you can heal the rest of the way.

Sadly, my friends, healing the heart is only the beginning. There are also habits, thought patterns, chemicals, and all sorts of things tangled up in this addiction. And I plan on doing more blogs about those aspects, too.

However, the heart the most important thing.

So it’s time for a question to all who are addicted to sex or anything else.

Where does it hurt?

Your ego? Your sense of worth? Your losses? Your shattered dreams? Your failures? Your helplessness? Did something happen long ago or is something still happening to this day? Was it a single, traumatizing moment or the slow erosion of the soul?

Nobody does something that they know hurts them unless they need it. So think back, think deep. What thoughts go through your head as you indulge in your particular vice? What grumbles, what peals of ecstasy?

Think of as many examples as you can. Now, what patterns do you see?

Some, like me, find they need validation. Some need love. Some comfort. Some need help in a seemingly unrelated area. It could be something else, too.

Whatever it is, it’s a need that hasn’t been met. Maybe not even addressed or recognized.

I don’t think Jesus will snap his fingers and fix your addiction (he can, but it’s not the common pattern). I don’t think becoming a Christian will make your problems vanish or give you unending supernatural strength to fight them.

No, you’ll still fight, still weep, and still relapse into a slobbering mess of post-high filth.

But Jesus is the only way to heal.

God doesn’t wear out. God doesn’t give up. And if there is a miraculous healing, where do you think it comes from?

I have no other answers for you. Not one. No other way I know that successfully and completely heals the heart. It is God who knows the heart and changes the heart.

And he’s not mad at you. Not grossed out by you. Not tired of you.

This blog has gone on long enough, so I’ll leave you to make the decision. Stay in the addiction you can already see threatening your heart, your relationships, maybe even your life, or partner up with the one who fights all the hardest battles for you.

If you want to talk, my name’s Mike and I’m at fencingwithink@gmail.com. I’ve been there, I can help, and I can keep secrets. And like I said, I plan on writing more articles about the other areas of addiction that need healing, so subscribe if you want to see more of that.

And hang in there. It gets better.

6 thoughts on “Fix Your Heart, Fix Your Addiction”