If you’re just joining, a Hell Scare is any depiction of sinners getting their just deserts, lightly toasted. It can be an actual attempt to scare people into Heaven or just a freakish image of the unholy afterlife to make this list.

While I don’t condone fear tactics alone in Christianity, I admire creativity.

And you know what? People were a lot more comfortable with Hellish imagery back in the day.

I mean can you imagine, in the modern age, Disney getting away with THIS?! 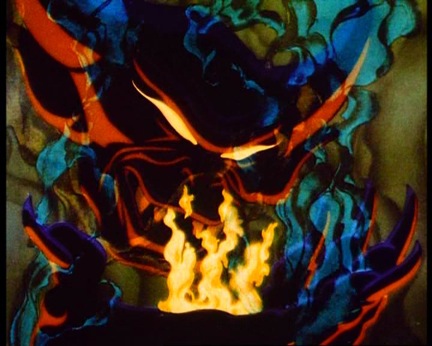 That kindly fellow’s name is Chernabog, and he’s the star of the Night on Bald Mountain segment of Disney’s Fantasia. I’m guessing Chernabog is Satan’s Tinder username because that’s totally Satan.

Admittedly, this one might not be as freakish as some other numbers on this list, but it’s still a masterpiece in ghoulish creativity and incredible animation. Just look at the coloration that went into making Chernabog such nightmare fuel!

Fantasia is a masterpiece, but also Disney’s most mature project ever, and Night on Bald Mountain is its capstone. What’s it about?

The Devil having a…social gathering.

Chernabog/Satan awakens from his slumber on the mountain and summons the ghoulish dead to him. They ride on the wind, on brooms, and skeleton horses to the mountain where Satan lights them all on fire.

And then everybody dances.

No, seriously. Demons and ghouls alike dance in the fires of Hell as Not-Satan watches with a mix of glee and disgust, regularly tossing his creatures into the fire or crushing them in his hand.

Disney has a strange knack for the dark stuff. I mean who else could take a cliched Devil image and make it so ghastly? Who else could find such ingenious uses for clashes of light and color?

And before the advent of digital technology, dark scenes in animation were DARK. As in pitch black, can’t-see-nothing. Modern animation always seems too well-lit to be actually creepy anymore.

So Night on Bald Mountain is a product of its time. A freaky yet gorgeously-rendered depiction of the devil in all his evil. 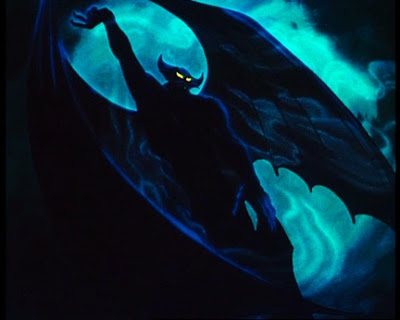 By the way, if any of you tell me that’s Bald Mountain and not Hell, I’ll hit you in the face with a poh-tay-toe and a poh-tah-toe.

NEXT WEEK: No one scares likes Christians!