When you’re talking about Hell Scares, you have to include Christians. Up until now, I’ve just showed depictions of Hell meant to frighten children to insomnia, but this is the first bona-fide scare-you-into Heaven tactic.

And it comes from one of Christianity’s most prominent and bold singers, Carman.

Carman became most famous for his story songs, like The Champion and Revival in the Land. A Witch’s Invitation comes off the same album as the latter, where Carman addresses what he claims to be a true story.

In the video, Carman gets a letter from a warlock named Isaac, who wants to meet the Christian mover and shaker. Carman isn’t keen, but feels God tell him to be a witness even to a warlock. So Carman reluctantly steps into a world he’s never known.

His house was filled with every occultic symbol you could fathom:
hanging pentagrams and horoscope signs,
a Ouija board and Dungeons and Dragons game set on the table,
a crystal ball with an incandescent shine.

Ignoring the laughably eighties idea that a tabletop RPG had all the Satanic fortitude of devices that summon the dead, Isaac the warlock hands Carman a book full of his miraculous exploits, all done by pagan rituals and witchcraft.

With eagerness, he pointed to each article with pride.
He said, “I healed this woman through a Babylonian chant.
You see this man? I cured him while performing Druid worship.
I was paid to curse this man with AIDS by his aunt.

But then, Isaac goes for the throat by asking, “What can your God do to compete with this?”

Now it gets interesting. Carman doesn’t know how to reply without making God sound like any other magician. So after a quick prayer, he changes focus. He says that this argument is irrelevant. It doesn’t matter who can do flashier miracles, it matters who can save the soul from destruction.

And whose soul is headed for destruction?

I said, “My friend, one day they’re coming for you.
The soft associates in your incantations. The friendly demons you think you now control.
The time will come when you’ll be lying in bed, wheezing like a dying animal,
when those spirits lay claim to the rights they own to your soul.”

Now if you haven’t seen the video, go up and play it. Start at 5:26 and listen as the damned shriek in agony.

It may look like 1980s puppetry now, but something about the grotesque design, the synthsized organ wails, and THAT scream still make my skin crawl to this day. 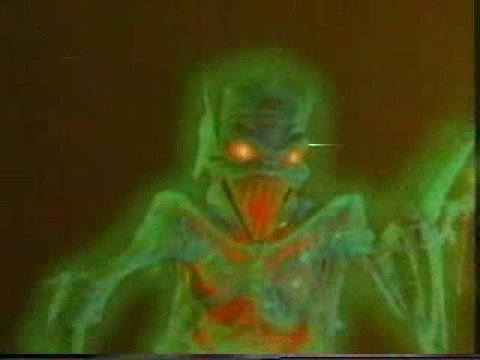 The lyrics aren’t much better.

“Then the room will grow dark, and the most hideous evil faces you’ve ever seen
will come flaming out of the floor with a yell.
The vile informants who promised reincarnation will crawl your spirit
and victoriously drag your soul to hell.”

You know what I like about this Hell Scare? Other than a petrified respect for anything that can make me shiver? It’s a Hell Scare done RIGHT.

Rather than a broad, “Sinners gon’ burn” message to the masses, this is a specific shot at a specific target, someone who is boldly playing with Satanic devices. This guy believes in Hell and thinks he can profit from its power–and has.

He brought Carman over to compare parlor tricks, but Carman both dodges and answers the matter by pointing out the one trick Isaac doesn’t know: how to control his own “associates.”

Then I grabbed the book and said, “In that moment,
which mantra, which incantation are you gonna chant to tell them to leave you alone?”
I said, “My friend, I know beyond the shadow of a doubt what I would say:
‘I am bought with the blood of Jesus; let me GO!'”

Carman is speaking to someone playing with fire, almost literally. Rather than compare miracles, Carman points to the miracle makers and says, “Your god manipulates, my God saves.”

It’s a brilliant move that reframes the argument and puts the interrogator in the chair.

And that’s why it’s number two. Because it may not have the freakish capacity of the others, but it’s probably the one and only time in history I’ve seen a Christian use a Hellish scare tactic in the right way.

But next week, we get back into the eeriness for a special Halloween blog post: the absolute freakiest thing I’ve ever seen in my life.