Did you see the film God’s Not Dead 2? I didn’t, because I watch enough bad movies by accident, I don’t need to do it on purpose. It was widely panned as Right-Winged propaganda, and from the clips I’ve seen, yeah, that’s pretty true.

But you want to know something weird? For a film that completely misunderstands…well, the whole freaking world…it ALMOST got it right.

The film’s premise is that a teacher mentions Jesus when a student asks a Jesus-related question, and the entire world comes hounding after her because the creators seemed to believe that the world is just one big anti-Christian conspiracy. Just say “Jesus” and “They” will take your job, kill your dog, and put drinks on your coffee table without coasters. In a smaller scene, some Christians talk about how the government is now forcing all pastors to submit their sermons to a judge, supposedly in an effort to control what they preach.

That’s when one character says something that’s almost insightful: “We’re at war. Not against flesh and blood, but against the powers of this world.”

This is a reference to the Bible, Ephesians 6:12, where Paul reminds his listeners that there is a devil and he is waging war against God, and thus his followers. To some, it may sound silly, but I think that this line is actually the key that could have made God’s Not Dead 2 a great story.

Why do I say that? Because I’ve seen it happen. It’s called The “Darkness” series by Frank E Peretti. And it’s awesome.

This Present Darkness and its sequel Piercing the Darkness are two novels built around that Bible verse, as the titles show. In both books, some big, secret organization is spreading a conspiracy to destroy Christianity. It comes with labels like “tolerance” and “inclusiveness” and “modern ideas,” but its true goal is to eliminate Christianity and all who adhere to it. In fact, Piercing the Darkness is just like GND2 in that it’s about a Christian being sued by the ACLU for doing Christian things at school.

But author Peretti makes one crucial distinction from God’s Not Dead 2: he actually shows us the “powers.”

The reader sees what the characters mostly don’t: angels and demons battling throughout both books. The secret organizations have their own front motives, but the true power is the demons behind them, whispering lies into their ears. The demons don’t care about tolerance or modernism, they are supernatural beings of pure evil whose every breath is drawn to oppose God and glorify themselves.

GND2 quotes Ephesians’ claim that we’re not fighting flesh, but spirit. So who do the good guys fight in the movie? The flesh. They fight people, school boards, court rooms, the ACLU, and others. There’s even a hilariously idiotic scene where the enemy lawyer explicitly says that he’s only here because he hates Christianity. He has no bigger motivation—not civil rights, not another religion, nothing to gain, just pure hatred aimed right at you—I mean the protagonist.

What’s more, Peretti’s books are allegories for the power and necessity of prayer. When the Christians pray in these books, the angels get stronger, enabling them to fight entire legions of darkness. Without prayer, when the characters try to deal with things themselves, the angels are weak and unable to stop even smaller demons, and thus the human characters can’t break their enemy’s power. Again, it’s an allegory, not a one-for-one truth, but it points out that the way Christians fight evil is by connecting to God.

Meanwhile, GND2 points solely to clever arguments, good lawyers, and otherwise amassing personal and political power. God has little to no place. So how can we be battling the powers of this present darkness when we’re using weapons of flesh to target flesh?

Why is This Important?

Many Christians are nervous. Over the years, we’ve seen traditional, political Christianity erode. We’ve seen opposition to Christianity rise more and more. We have lost worldly power while anti-theistic forces have gained it. There are times when it can seem like there’s a conspiracy against us.

And there is. But it’s not the conspiracy we think it is.

As Christians, we believe there is evil in this world, supernatural power that hates who we are because of who we follow. But that evil is laughing at us. Because we believe we’re living in God’s Not Dead 2 instead of the “Darkness” books. We speak out against the Democratic Left, the media, socialism, liberal education, the news, the internet, atheists, and many more. Yet even if all these things truly are part of a vast conspiracy to eradicate Christianity…why? Because the devil is the “power” of “this present darkness.” That is our target. At best, we’re shooting the symptom and missing the cause. And if you don’t know the cause, how do you know which symptoms are actually bad and which ones are just the body fighting against your “cure?”

In his song R.I.O.T, Christian singer Carman wrote a quick, but powerful line: “Love nothing but God, hate nothing but sin.” I don’t think Carman was saying you can’t love your spouse or your kids or the taste of chocolate cake. But I do think he was saying there’s only one thing Christians are allowed to hate: evil. Not atheists, not political opponents, not even our genuine enemies (Matthew 5:44). Hate nothing but sin.

Isn’t that why Jesus said, “Do unto others as you would have them do to you?” (Luke 6:31) Would you want your enemies to write you off as nothing but close-minded and cruel, to destroy you because there’s no good in you?

Many Christians and they’re tired of having fingers pointed at them. It’s easy to point at the Left, or the immigrant, or the television and say, “They’re trying to take away my way of life!” To those people, and all Christians like them, I want to remind you want Carman said, what Peretti said, what Paul said, and what Jesus did. The only true enemy we have is evil itself. 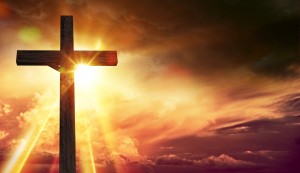 Jesus was truly conspired against. The Pharisees held their council at night where they couldn’t be seen. They drummed up excuses to punish Jesus with death. Pilate and the Romans shrugged off injustice and let Jesus die. Even one of Jesus’s disciples betrayed him.

Yet Jesus hated none of them, but died for all of them. The words “Father forgive them for they know not what they do” (Luke 23:34) are so telling. Jesus knew that they were under the powers of “this present darkness,” and he pitied them rather than destroy them.

Yes, there are people who absolutely hate us. Yes, there are some battles which must be fought in the flesh. But when we forget the spirit, we sully the flesh and soil our victories—if we even win. Remember: Jesus’s victory involved his death. To the Christian, victory can take funny shapes. Like Jesus, we must be willing, when necessary, to lose battles in the flesh to secure victories in the spirit.

So when faced with opposition of any form, when you feel that uncomfortable stirring that says, “I’m in the moral right, they’re in the moral wrong. I must destroy them before they destroy me!” I offer the words that Jesus used in Matthew 16:23: “Get behind me, Satan.”

15 thoughts on “The ACTUAL Anti-Christian Conspiracy”