When it comes to anime, I’m really more a fan of the medium than the shows. I like how beautiful the artwork can be, I like the incredible storytelling style that can get silly and serious in a flash, and I love that it caters to many age groups, unlike American animation, which goes from child-fare to South Park before you can blink.

The shows themselves, however, can really hit a lot of low notes really fast. May that’s a stylistic difference from Japan to US, but still. However, in my ventures, I did manage to find some anime series that were spectacular, and I wanted to do a top-10 list.

But I only like 6 anime thus far…and one of them I REALLY shouldn’t watch anymore…so yeah, 5 Anime that Actually Don’t Suck.

This a fun anime that takes the summertime romance to cosmic levels. No, literally, the main girl is an alien. She crash lands and tries to fit in, falling in with the main cast as they spend their summer break trying to make a movie about, of course, an alien. But like I said, it’s a romance series, and it’s a long, complicated chain. Brunette likes tall guy who likes short-haired girl, who likes main guy who likes alien girl, who is trying not to like ANYBODY. Can you tell I didn’t memorize their names?

This could fall flat, but the characters, for the most part, are interesting enough. You really see the heartache as the chain starts to go backwards with everybody getting snubbed for somebody else and it’s pretty sad at times. But mostly, it’s a lighthearted summertime series with a fun cast of characters.

The first thing that caught my eye about this anime was how different the main character looked (above) from other male leads in anime. The second was how he was actually doing something (making a movie) with his life. The third was how the crash-landing alien literally KILLED him and brought him back to life.

And that was just the first 30 seconds of the series. Originality, quality, and intrigue. THAT’S a good hook!

This one haunts me.

It looks like a standard harem anime, but the cake is a lie. This show takes every single harem trope and turns it on its ugly head. Main guy is not selfless and kind, he’s a sex addict who uses every girl he meets. Aggressive girl pushes her way past other girls, stepping on them in the process. Shy, quiet girl, who can’t imagine her life without the main guy literally loses her mind.

Funny thing is, that’s what makes this show so interesting! It deceives its audience with a bubbly happy sheen and and upbeat theme song, but as the 12-episode series goes on, the sheen begins to unravel and the dark nature of this anime is slowly brought to the light.

And actually, it’s realistic! What would ACTUALLY happen in a harem? That’s right, jealously, deception, cruelty, double-crossing, and high tempers. Now imagine it in high school. Yep, there you go. The show tries to pretend it’s a happy little anime, but it’s a true resonance of its characters: a plastic smile with a dark underbelly.

Every episode is darker and crueler than the last with true intentions coming forward, backs being stabbed, and and lies coming undone. It all comes together to form a conclusion that takes this series in the darkest place it could possibly go, and it’s not just evil, it’s actually bone-chilling. And every second gets closer and closer to the shows pitch-black heart, ending with a spine-tingling closing image that will linger for days to come.

And it doesn’t condone the character’s actions. It simply tells a tale of selfish people making bad decisions. The morals are wicked, but the narrative is sublime. 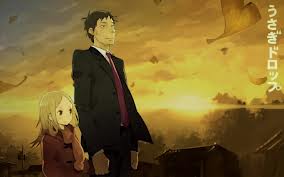 Back to happier topics. This is one of the simplest and sweetest anime you’ll ever find. A 30-year old man, Daikichi, adopts his grandfather’s 6-year-old daughter (yes, you read that right) when the old man dies. They do life together.

That’s it. That’s the plot. And yet the simple, soft innocence is so painfully endearing that you never want the show to end. Rin, the little girl, is adorable, and Daikichi steps up to be a paragon of single dads, doing everything possible to care for and love that little girl.

But the reason it’s number 3 is because the ending kind of trails into nothing. The episode is good, but the series had been leading up to one or two things, but ends up in a neutral place. Still, it’s a simple delcacy and a joy to watch.

All right, an action anime! And boy is it a good one! Seven masters summoning seven magical warriors called servants to compete in a city-wide melee to the death. The action scenes are utterly amazing and the characters each have their own powerful charm, whether you love to love them or love to hate them.

But what makes Fate/Zero so impressive is the fact that it’s a prequel to a truly crappy anime. Fate/Stay Night was the original with a great concept, but they botched it in every way with dull storytelling, misplaced harem nonsense, a main character you just want to smack, and they even end up ruining the best character, the warrior called Saber.

But Fate/Zero took its original concept and flew off into the sunset, creating a seven-way brawl with no true good or bad guys, everyone fighting for their own ideals, and servants who are actually characters instead of extensions of their masters. Sometimes you root for the main guys, sometimes you want others to win, but you’re always invested in great characters having great fights.

However…the very last episode almost ruined it all. It’s not much of a spoiler since it’s a prequel, but it just kind of…ends. What occurs doesn’t make a whole lot of sense and you’re left feeling truly dissatisfied, except for the main master’s revelation. Still, the series rocks.

Heaven help me, I love this anime. Yes, it’s another harem, but yes, it’s once again tweaked to make the genre bow down to the series. Most all the girls have a perfectly legitimate reason for liking the guy and some even seem more compatible than the main girl at times. But on the other hand, their liking does not equal an inability to live without him. In other words, strong characters who are more than silly little girls with a crush.

And it’s really the characters that make this series, namely Tomoya, the main guy. The series is his journey from boyhood to manhood, which never ever happens in a harem. This series doesn’t just want him to play with the girls for 20 episodes, then pick, it wants him to grow. But even when he starts out as a delinquent  he has this jerk-face charm you just can’t help but love The first season is traditional harem–girls compete, one wins, I love you, the end. But no! Where most series end, this one is just starting.

The show’s true genius lies in its second season, where it took a high school anime and grew it up into adulthood. Now the characters are trying to live their lives, plan their futures, secure jobs, get married, have children, and simply do life! And it’s glorious. The second season is an emotional roller coaster, and there are times when it hurts so bad to watch these characters suffer the tragedies of life, but it feels so good when they step back up and break through.

Those are my favorites thus far. Do you have any favorites?